Showing posts from February, 2011
Show all

February 28, 2011
I have been too busy to post for the last few days, but luckily not too busy to read. For all fans of Ian Fleming and Len Deighton, I recommend reading the HBGary-Anonymous saga which Ars Technica has been covering over the past few weeks. Anonymous is the hacktivist collective which recently espoused the cause of Wikileaks by taking down the sites like PayPal and Visa when they shut off services to the site. Now the spotlight is back on Anonymous thanks to their spat with a US based security agency called HBGary. The story unfolds like a modern day spy novel. HBGary apparently produces malware, rootkits, viruses, socially engineered profiles - but is on the side of the angels, since this is done in the interest of counter-cyber terrorism. Or is it? The lines seem to blur as you read more about their activities. Anyway, to cut a long story short, their CEO, Aaron Barr, tried to track down the Anonymous ringleaders and claimed to have gotten some of their identities. Retribution wa
Post a Comment
Read more

A ready reckoner - do you need a tablet? Or a netbook?

February 14, 2011
With the explosion of smartphones, tablets and laptops, I've been wondering what I really need (Note : need is different from want, and operates in a world constrained by budget and common sense. It's unexciting but it does save money and frustration) You NEED a tablet if You travel/commute a lot and use the Net when you do You are considering it as a netbook substitute Your usage is more oriented towards browsing and less towards data input (you surf the net or check your mails, more than you type or do work). If you watch more movies/ videos, a tablet has a better screen than a netbook and will give you more viewing pleasure You are prepared to spend on an additional 3G connection (in India, we cannot rely yet on the WiMax network and 3G connectivity rollout is likely to be faster. So it makes more sense to buy a 3G enabled tablet even if it's costlier) You NEED a netbook if You travel/commute a lot and use the Net when you do Your usage comprises mainly browsin
Post a Comment
Read more

Android will grow in India in 2011

February 13, 2011
This Sunday, I was at Croma in Phoenix Mills, Mumbai, and I was observing shopper behaviour at the mobile phone counters. Just 3 months ago, the buzz was all around the Blackberry Torch, then the Nokia N8 and of course, the iPhone. This month, for the first time, it was impossible to get near any of the Android phones - HTC Desire especially generated huge interest. The Nokia and even the Blackberry counters had a deserted look in contrast. With HTC finally launching a full and almost up-to-date range of models, Samsung introducing many-priced flavors of the Galaxy series, and Micromax and Ideos bringing in some very respectable budget models, Android is finally revealing its full potential in India. IDC India projects that approximately 155 million handsets were sold in India in 2010, of which a modest 6 million were smartphones. But smartphone market share is growing at a whopping rate (over 200% Year on Year growth in 2010). With smartphone prices falling and more models becomi
Post a Comment
Read more

Will Nokia do Android? WP 7? Rise like a phoenix from ashes?

February 09, 2011
The big news buzz now is around a leaked internal memo sent out by Nokia CEO Stephen Elop to all employees. Engadget has  published the memo, in which Elop has acknowledged the failure of his own company to act, and warned that they are standing on a 'burning platform'; "The first iPhone shipped in 2007, and we still don't have a product that is close to their experience. Android came on the scene just over 2 years ago, and this week they took our leadership position in smartphone volumes. Unbelievable." Any Nokia watcher, or Nokia loyalist would agree.Unbelievable. Especially here in India, where we hold Nokia close to our hearts. All of us who started using phones in the 90s have probably owned or used a Nokia phone at some point (if not through the years). I don't think any of us would dispute their huge expertise. It shows in every best selling model they have created through the years -  5190, 3310, 6600 and more recently, the e-series phones
2 comments
Read more

Android ended 2010 as the largest operating system in the world. While it was hard to find the top-selling Android phones in India last year, this is not the case any more. HTC, Motorola, Samsung and even Sony, have launched a wide portfolio of Android handsets in India. In this post, I am going to deal with budget Android phones. As per my definition, a smartphone which costs less than Rs. 15,000 is a budget phone. The high end or premium phones mostly cost Rs. 25,000 - 35,000. In fact, Rs. 35,000 seems to be the ceiling for a smartphone today. A smartphone operating system is best showcased on top end hardware. Keeping this in mind, there are some conscious trade-offs that you make when you buy a budget Android phone. Slower processor speeds (average is 600 MHz) are on offer at this price and make the phone interface feel a bit sluggish. It can also limit the apps and games that can be used on the device. Also, it seems that at this speed Adobe Flash 10.1 will not work, so flas
Post a Comment
Read more

The Dell Blog has announced the launch of the Venue and Venue Pro phones in India on Feb 3rd. According to the blog, both phones will be showcased at the Bangalore Fashion Week in Swapnil Shinde's fashion show on Sat. 5th February. International reviews so far have praised both phones for their superlative build quality and finish. Both phones share some hardware specs : a 1 GHz QualComm Snapdragon processor, 4.1 inch AMOLED capacative touchscreen protected with Corning's Gorilla Glass for additional strength. However, Venue runs Android and Venue Pro (touchscreen + QWERTY) is Dell's first smartphone runnning the Windows Phone 7 OS. Also the Venue has a 8MP camera while the Venue Pro has only a 5MP camera. Formerly codenamed Thunder, the Venue, runs Android 2.2 (FroYo) and will be priced at Rs. 29,990. Formerly codenamed Lightning, the Dell Venue Pro has been reviewed as the best among the bunch of handsets running Windows Phone 7. It packs an appropriately high pr
Post a Comment
Read more

February 04, 2011
1.It was estimated that the number of cellphone users worldwide crossed 5 billion in 2010. 2. Approximately 300 million smartphones shipped in 2010 (and 101 million shipped in Q42010 alone). The smartphone segment has a YoY (year on year) growth of almost 80%. and represents approximately 20% of total mobile phone sales. 3. Google's Android  ended 2010 as the largest operating system in the world. In Q1 2010, Android held just 9.6% market share; by Q4 2010, it had  33%. With 600% YoY growth, Android is growing faster than the smartphone segment itself, indicating that it is actually driving the adoption of smartphones. 4. Apple is placed 5th overall in terms of global market share among cellphone makers. Apple has just 4% of global market share, but makes more than 50% of the cellphone industry's profit. In  December 2010, Apple overtook Nokia in revenue share. Sources Canalys Asymco
Post a Comment
Read more

Bada apps - what are you using? 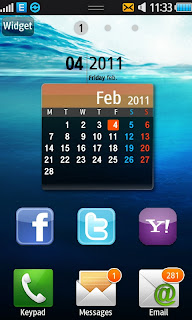 If you read my blog regularly, you will know that I own a Samsung Wave and like other bada users, I have been waiting to see how the bada app store shapes up. 2011 will be a critical year for the future of bada. Some people still do not consider it as a true smartphone platform, but a hybrid 'smart feature phone' OS that could potentially compete with older versions of Symbian like S60. Samsung's own vision for bada suggests that it is meant to make dumbphones smarter! Since the past few  months, Samsung is offering paid apps which I feel is a bit premature. I am not even sure if I will settle into this OS in the long term and I am still sampling what the store has to offer. I get the feeling that the ratio of paid apps in the Samsung store is very high. As with all app stores across platforms, the big problem is that you cannot try before buying and have no way of knowing if the experience will be good or not. Since October, when I bought my handset, I have downloaded
Post a Comment
Read more
More posts