It's official - tablets fall below Rs 30,000 barrier in India

January 28, 2011
Today, E-zone is carrying two separate ads in the Times of India, Mumbai for its electronics sale. Amidst the fridges and washing machines, two rather delectable items are on sale; the Apple iPad, and the Samsung Galaxy Tab.

Pllease note that these prices are for Mumbai and I have no idea what they may be in other parts of the country.


1) Apple iPad (which was officially launched in India last week) is available at the following prices: 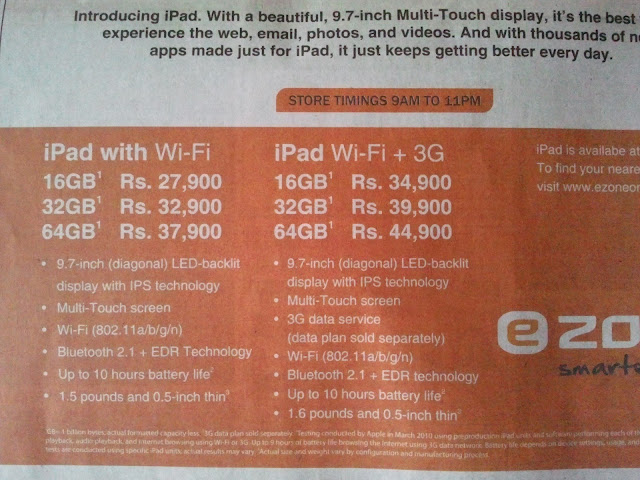 2) Samsung Galaxy Tab prices have been slashed (no doubt to keep up with Apple) and the Tab is being offered at a 22% discount at Rs. 28,990 for the 16GB Wi-Fi + 3G model. Incidentally, the compatible iPad is Rs.34,900, which makes the Tab a good deal if you want a 3G tablet. I do think that the price differential between the wi-fi only iPad and the 3G version is too large. 3G is a default option on phones nowadays and should be on tablets too.

I expect to see a few more tablet-touting geeks around now. The Rs.30,000 barrier was a psychological one for sure and it was tough to justify the purchase. Now the price barrier has been breached, and hopefully it will not be long before the tablets drop below Rs.25,000.

My advice is still to wait, because a tablet is a non-essential item, unlike a phone or a laptop, and the category is still evolving. The iPad 2 launch is due in April and going by the rumors, it will be a much-improved product with an SD Card slot, front and rear cameras, dual core processor and more RAM. And of course, 2011 is touted to be the year of the Android tablet with Motorola Xoom leading the way and others coming close behind. Geeks can keep their fingers crossed that Notion Ink's Adam makes it to mass production.

I would buy a tablet if it is available in a similar price range as a netbook (Rs. 15,000-20,000) as according to me, it does pretty much the same function. Hardware should soon reach parity, as it has with smartphones. What one should look for (and if necessary, pay for) is a better user interface and ease of use. Probably also worth it to play around with one for sometime before deciding to buy.

In fact, today I was smiling to myself, thinking that we ooh and aah over what phones or tablets are doing, when we have been doing so much more on our laptops for years. That's the excitement value of a new form factor or a new toy. And I guess that is the fun of new technology