July 05, 2010
While Apple gets flamed for its iPhone 4 reception debacle, can Microsoft be far behind?

The cellphone market today is defined by a punishing rate of innovation and demanding users who expect their devices to push the envelope with each launch. Even the much-hyped Google Nexus One failed to hold its own against the superior offerings from HTC and Motorola. And even the iPhone it seems, is facing a tough time from its competition.

Microsoft, yet to launch its much-awaited Windows Phone 7, put one exploratory toe into the mobile market and got rather badly burnt. The Microsoft Kin (in two versions, Kin One and Kin Two) targeted at the teenage demographic, was launched in May and already, MS has announced that the project is being shut down and merged into the W7; apparently they barely managed to sell 10000 units of the phone. With just 6 weeks on the shelves, it's the shortest lifespan of any product put out by MS in its history

Zack Whittaker gives the Kin a tongue lashing on his ZDNet blog , saying that MS paid the price for not truly understanding the teenage segment, which is a technologically demanding and evolved user group.

Looking at CNet's review of the Kin, and reading the user experiences, it appears that the phone focussed on the social networking experience, believed to be critical to teens, by providing easy access to Twitter, FB, MySpace etc. through the home screen, and providing an app to facilitate sharing.  It had a couple of neat features that sounded interesting such as the timeline, which shows all your activities (pictures, messages, contacts) in a timeline for a designated period. And the Kin Studio service which provides an online free backup for all data.


On the flip side, the phone was said to have a sluggish interface and was bundled with an expensive data plan from Verizon which must have been a deterrent for price sensitive students. And the review mentions more glaring omissions like absence of calendar (Why??) and IM clients. Not to mention no App store.

The phone itself is cute looking, but I would imagine teens want cutting edge, rather than cuteness. (images from CNet)

Anyway, while the tech pundits analyse the Kin's failure and the implications it has for the upcoming W7 platform, and while some blame Ballmer for the fiasco, some dude has put up a Kin Memorial Site Microsoft Kin Forever Missed. You can light a candle, leave a tribute, write a story, or just gawk and grin a bit like I did. Aww, MS I feel bad but you win some, you lose some. To rub more salt in the wounds, ZDNet reports that the site has already attracted 32000 hits. Clearly, we all LOVE funerals. 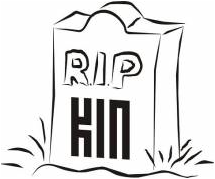 (Image from Kin-Forever Missed). Sources for this post : ZDNet and CNet
Microsoft Kin