July 05, 2010
Here are some of the cellphones that most of us will never buy, but you can bet your sweet life some celebrity somewhere (maybe even in Bollywood) will. No talk about (possibly non-existent) specs, let's just roll our eyes at the images.

The Goldvish Revolution with a built in watch movement. I can't confirm but apparently it is priced at approximately 50000 USD or Rs. 22 lakhs

And the Goldvish Le Million touted as the most expensive mobile phone in the world - it actually costs slightly more than a million dollars. 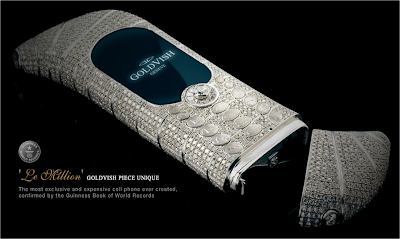 And finally, the slightly more normal looking Goldvish Illusion, which you can buy if you prefer, in yellow gold, with a crocodile leather back inlay, and several choices of colors 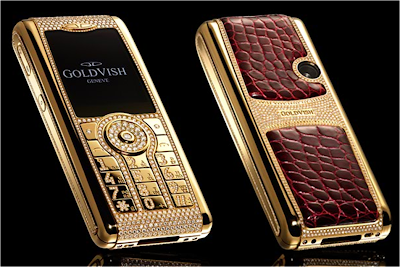 If you really crave this, the Google search throws up some Chinese sites offering cheap replicas starting at 2000 dollars. You have a choice of rubber, alligator skin or calfskin for the back cover

3) Vertu
The latest from Nokia;s high-end stable is the USD 7500 Constellation Ayksta which is a flip phone. Images below are from Gear Diary In case you are anxious about specs, I should assure you that all these phones have bluetooth, MP3 player and calendar, and also show the time. Some may have cameras. But like all luxury phones, the spec list is pretty thin.
Goldvish Tag Heuer Meridist Vertu Constellation Ayxta Vertu Signature