Samsung hopes to ride to this ambitious market share on their home-grown bada mobile OS platform.bada  is entirely a touchphone platform.

According to the bada site, the word bada means 'ocean' in Korean, and should always be written in lowercase. 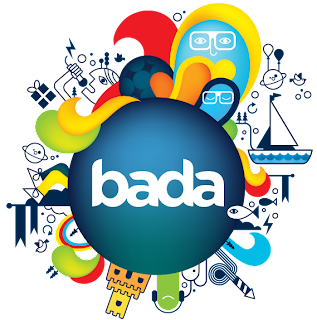 The site also interestingly comments (and I quote);

"The vision of bada is smartphone for everyone. bada's main goal is not to compete with existing smartphone platforms. Instead, bada will turn Samsung's conventional customers into smartphone users by providing cost-effective smartphones. This means that bada will open and extend a new smartphone market which does not exist in the current mobile market"

Hmm. It's an interesting premise especially from an Asian perspective. According to the Economic Times, Samsung's market share in India in 2009-10 is 17.4%, up from 10% last year. The same article notes that Indian handset manufacturers like Spice, Karbonn and Micromax have captured upto 14% of the Indian handset market. Most of these companies offer cheap but expensive looking and feature rich handsets with QWERTY keyboard, trackball, Dual Sim etc. in a Rs.5000-10000 range. Samsung will definitely have one eye on the low-cost competition and hope that Bada can provide a competitive advantage, by providing a branded alternative, which the Indian customer will always prefer. It will also take the fight to Nokia in the low cost handset market. So when I look at bada, I would prefer to not compare it to Android, iPhone OS or even S^3. (note that Samsung continues to support the Android platform through models such as Galaxy S). By their own admission, Samsung's vision for bada seems to be enabling better user experience on low-cost hardware through the OS, not limiting it only to the high end and expensive handsets. In India, we know that low-cost works and works big time. Maybe Samsung's ambitious vision can come true.

Today, apps and widgets are critical to the success of a platform and Samsung has launched its App Store, which should expand rapidly now that an SDK has been released for developers. One of the areas that Samsung is betting heavily on is mobile gaming and the company has tie-ups in place with Gameloft, Capcom and EA.

The first bada-powered Samsung handset is the Wave S8500, which has been launched worldwide and is available in India for Rs. 19,100 according to Fonearena

This is described by Samsung as a 'premium image phone' packing a Super AMOLED (high daylight visibility) Display 3.3 inch screen, a 1 GHz processor, 5 MP Camera, High-speed Bluetooth 3, HD recording, and the list goes on. But note the price, in comparison with Android devices and Samsung's own Android powered Galaxy S, which are all in the Rs.30000 range. Already the high end bada phone is way cheaper than premium competition. Initial reports like this one on Engadget suggest that the bada OS still needs working on, and may be at an immature stage. But Mobile Review has given the device and the new interface a big thumbs up.

People speculate as to why we need another OS. There are also criticisms that it is just a mash-up of Android and iPhone and the Wave itself just feels like a feature phone. But I have a different take. I am holding Samsung to their vision of providing bada on low cost handsets. I want to see phones in the Rs. 5000-10000 range equipped with push mail, widgets and Apps, fantastic capacative touch interface and an experience closer to smartphones. I can see how that could transform the phone experience of the average budget phone user. And I hope Samsung takes that route.

Might just persuade me to switch from Nokia and give it a try :)
cellphone market share in india in 2009 Samsung bada OS Samsung Wave in India