Chronicles from history : all the portable music devices I have ever owned

June 26, 2010
I really started this blog to write about MP3 players and headphones and in the recent past, I have just written about everything else. And that's the only excuse I am going to offer for this post.
1) Sony Walkman 1986
Dad got it back for me from a trip to Japan and for the life of me I cannot remember the model but it looked like this more or less (image from Audiogold UK)

I used it till it broke and I say that with pride and full approval of my dad who believes we must use and wear out all our gadgets because anyway we will replace them 2 years down the line. I recall that this player used to jam my tapes regularly, stopped fast forwarding and towards the end of its life, operated only on prayer, but it was with me for three years. At least. No recall of what headphones I used with it, I was in school at the time! Thanks Dad for my first taste of portable music. Later I had a Panasonic walkman and another Sony, but the first Sony stays in my memory.

2) Sony CD Player (1998)
This came much later, after I started earning on my first job. I remember buying this as a birthday gift for myself. Here is the nearest picture to what I owned. Again, I can't remember the model, but I payed nearly Rs. 5000 at Sony World Chennai for this one. Image from Engadget;

I paired it with a pair of Sony Street Style 'phones which I picked up at the Sony World along with the player. It cost me Rs. 3000, if I remember right. Here is an image, courtesy uselog and I am using a quote referenced by Jasper in his post about the design of the headphones

Kazuo Ichikawa began to focus on a newer, more casual style of headphone that would fit behind the neck rather than over the head or directly in the ear. [...] His inspiration came from the way people use conventional headphones in the street (allowing them to drop behind the neck), how people wear baseball caps (often with the visor pointing backwards), and the apparatus that folk-singer Bob Dylan used to support his harmonica while performing in concert.
"A critical issue when designing headphones is to make them fit properly," says Mr. Ichikawa. "Yet there is a huge difference from one person to another in the distance from one ear, over the top of the head to the other ear. When you factor in hair styles and the possibility of a cap or hat, you realize that the traditional headphone is no good" (Digital Dreams, The Work of the Sony Design Center, by Paul Kunkel.)

I was not a geek when I bought this sound set up but I realise that I lucked out. Over the next 6 years, I enjoyed fantastic sound and started a decent CD collection. The player did not play MP3s and it became temperamental after 2002 so I used to hook it to my home theatre system through the Line In and enjoy my CDs at home. I traded this player in 2004 at Rs. 1500 against a new 2.1 music system.

I'm not the type who can survive without portable music for long and on a business trip to Bangkok I seized the opportunity to pick up a Creative MuVo V200 from the famous Panthip Plaza. I paid nearly Rs. 5000 for a 1 GB player without a rechargeable battery.(image from The Register review (2005) Incidentally, I bought this player blind, and on a tight budget, but it is one of Creatives best-selling models down the years, in various avtaars. I was extremely happy with the sound quality and the battery life on 2 AAA cells. I could not afford anything more than the stock headphones but it sounded great to me. And it was the first time I really experienced MP3 portability. One of the conveniences of this device was that it had a built in pen-drive so you did not need any wires to plug it into your laptop

I used to hang it round my neck :) when I travelled in Mumbai locals to work. I finally sold it to a colleague for Rs. 3500 after 2 years. She tells me it is still working fine, though she now uses it purely as a 1 GB pen drive.

And I sold it because something new and exciting was compelling my attention totally. Like, Creative, Apple and everyone else did not exist.

The decision to purchase this player rather than an iPod, made me recognise the geek in me. For the first time, I browsed forums and sites for reviews to make an informed choice. And I decided in favor of open source firmware (rockbox), drag and drop functionality and fantastic sound quality. After a couple of hiccups, I procured the unit of eBay India for  Rs. 13000. It was not officially available in India, but I wanted it at any cost.

I quote with pride from Andreas Odegards fantastic write up  on ABI about the 10th anniversary of MP3 players (it's an old article but a must read):

"If there ever was a cult mp3 player in the audiophile community, this would be it. Even today - 3.5 years after its release - it's used by people everywhere and sell for a decent price on sites such as eBay.
The H320 and H340 players natively support OGG along with MP3 and WMA, and are are also capable of playing back video - though this feature is very limited. Rockbox expanded the H300's features to include 15 audio codecs - among them FLAC - and that combined with the excellent audio quality has made this player the audiophile legend that it is."

'Nuff said, now look at the player itself; image from Tim Andersen's IT Writing 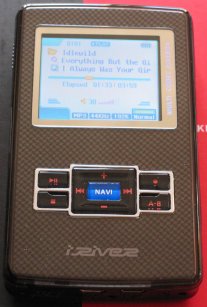 It is no beauty maybe, especially next to an iPod but it brought a lot of beauty into my life, and I was proud to own it. Two years ago I passed it to my Dad. It still works, but battery life is down to 1 hour. I paired with Sony MDR In-ear phones which gave me really good sound quality. I cannot describe the joy this player has brought into my life. I loaded my first videos, I joined my first fan community (misticriver) and I listened to the best music my ears had heard till then.  RIP iRiver.

My current player is the famous Cowon D2 (16 GB) which is also a classic 'best' MP3 player from iAudio. I have an 8 GB version with Indian warranty.(image from techtree). Among the many things that I love about this player are that I charge it once in 2 weeks though I play it all the time, I get fantastic playback either through my headphones or when I plug it to powered speakers, and a vibrant support community at www.iaudiophile.net

I pair it with my first audiophile headphones, the awesome Triple Fi 10 series. And I am in sonic bliss.