April 26, 2010
2010 will open up a new choice of smartphones running on different platforms. As an end-user, you now get to choose not only the brand and model, but also the platform OS. And you will have a choice of Android, Windows Phone 7 and the good old Symbian, in addition to iPhone.


Across tech sites, I have been following a slew of releases, leaks and press releases about what's new, so I thought I would do a round up.

Windows Phone 7 : A late entrant to the party, expected to be launched by end of the year, Microsoft's Windows Phone 7 platform will compete with Android and the IPhone OS. Familiarity of MS users with the OS is a key advantage, and so is compatibility with all the software that you would run on your laptop or desktop including MS Office. The OS has been demo-ed and Engadget reports  that it is an entirely fresh interface, based on a new approach to navigate a phone. Development of this OS and the apps to run on it is still in progress and it should be launched by year end. Take a look at the clean, tiled interface shots from Engadget (I really like the way the interface looks)

You can also take your pick of brands offering Windows 7 including LG, HTC, Dell, Sony Ericsson and even Motorola. And across the models, you can choose a keyboard-style or a touch interface depending on your comfort level. The bummer is that the Windows 7 OS will most possibly not run on earlier hardware/ earlier phones. You'll have to upgrade.

Microsoft will not manufacture the phone themselves, but have placed stringent hardware requirements on manufacturers including capacitive touch screen (with or without an additional keyboard), a high performance-low power Qualcomm Snapdragon Processor, Wi-fi and hi-res camera.

The latest leaks of an upcoming Windows 7 Smartphone on the Net are of the Dell Lightning on Engadget. Check out the pix of the phone from the site; 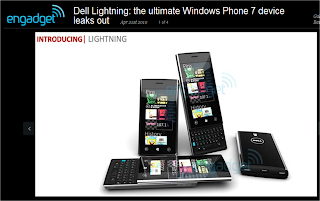 (You can browse more pictures of the phone in the Engadget picture galleries)
The Dell Lightning is a slider phone with touch screen + QWERTY keyboard, 5MP camera, 1GB Flash memory + 8 GB card and a 1 Ghz Qualcomm Snapdragon processor. This is one phone I would like to pick up!
Dell Lightning Smartphones 2010 Windows Phone 7