March 29, 2010
There is an inherent risk in loving and impulsively buying the latest and best tech products - the risk of lemon-picking. In other words, if you're the first to try something new, you could end up with buggy or flawed products and then you have to fight to get a refund or replacement.

This is what happened to me with the Logitech Kinetik Backpack released in 2007. Logitech no longer manufactures or lists these on its website, which is enough proof that I bought a lemon :)

Anyway, I sprung for this beautiful notebook bag to carry my very heavy 15.4" Lenovo laptop, seduced by the Mutant Ninja turtle looks of the bag, as well as positive reviews on CNet and notebook review.

The bag looked great and acted like armor at crowded airport terminal queues; anyone who pushed against me hard was liable to break a few bones if they came in contact with that hard shell on the back. I have heard a few very satisfying 'thunks' coming from persistent pushers in the rear, followed by a blissful absence of pushes. It really made my day. Almost made up for the 5 kg deadweight on my back too.

But the durability was a concern, as voiced in several of the reviews. And in fact, within 3 months of purchase, the condition of my bag was  like this (apologies for the grainy pictures) 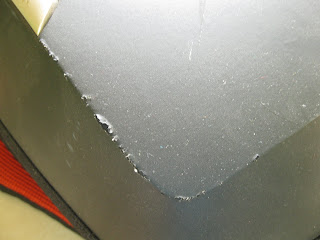 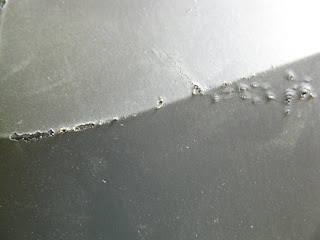 Don't mistake me, I love a battered/ shabby look, but this bag made me look like I was returning from a war zone and I did not like the look of the moon craters that were developing on the surface.

Logitech support is both prompt and helpful. I contacted the Asia-Pac support through the website and was directed to a person in Logitech Mumbai who promptly issued me a replacement bag. Unfortunately in another 3 months with even lesser use, the bag looked exactly the same as the pictures posted above.

Now the replacement bag is lying in my cupboard, because I just can't bear to see it look more worn and torn than it does now. The Exo shell certainly does protect your notebook securely, but it is not self-protecting - a basic design flaw in my opinion. A laptop bag does have to go through a certain amount of rough use, even in an aircraft cabin and the soft/ hard casing of the Kinetik Backpack mercilessly showed all of it.

Now I have switched to a (non-laptop) Timberland rucksack and a lighter, smaller notebook. And I am happy again.

So yeah, lemon alert on this post :) Did I mention it's a Rs. 5000 lemon? Saving the best for the last I guess.
flawed design Logitech 15.4 Kinetik Backpack